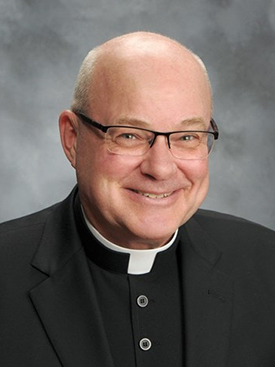 ​In Recognition for Leadership and Service

Marvin was ordained a Catholic priest June 8, 1991 at Rosary Cathedral, Toledo, with First Mass of Thanksgiving celebrated in Saint Henry Church, June 9, 1991. He was named a “Prelate of Honor” and given the honorary title of Monsignor by Pope Benedict XVI in 2010 in recognition of his service to the diocese and the Church.

Borger served in several leadership positions for the Diocese of Toledo, including Vicar General, Chancellor, Tribunal Judge, College of Consultors, Priest Council, and currently member of the Bishop’s Senior Staff, Vicar for Clergy, and Senior Director of the Clergy, Consecrated Life and Vocations Department. He served in parish assignments in Fostoria, Ohio and Perrysburg, Ohio, including as Pastor of historic Saint Rose Parish, Perrysburg, 2007-2015.

Borger earned a Bachelor of Science in Electrical Engineering Degree from Ohio Northern University in 1980, graduating with “High Distinction” and a member of the national engineering honorary Tau Beta Pi. He served as Chaplain to the Knights of Columbus and Boy Scouts of America.