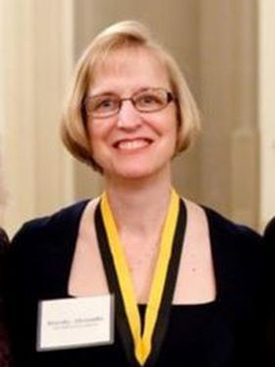 ​In recognition for Leadership

​Dorothy was inducted in to the Virginia Communications Hall of Fame in April 2013, which honors men and women who have demonstrated exceptional achievement in the fields of newspapers, magazines, journalism, public relations and media education.

​She joined the Associated Press (AP) in 1982 as a reporter, moved up to correspondent, then became the Virginia Associated Press bureau chief; she has been involved in coverage of such stories as the D.C. sniper shootings, 9/11 and the Virginia Tech shootings. Dorothy worked at the Kansas City Star and was a part of the team that covered the collapse of the Hyatt Hotel skywalk in 1981. The Star won a Pulitzer Prize for its coverage of this disaster and its aftermath.

Dorothy served as president of the Virginia Coalition for Open Government board, created a coalition of newspapers, and wrote the initial contract that resulted in the creation of the Virginia Public Access Project. She spearheaded the first Freedom of Information Act (FOIA) audit organized by an AP bureau, and only the second FOIA audit in the country. Dorothy plays an important role in AP election coverage by declaring winners in Virginia elections for president, U.S. Senate, U.S. House of Representatives, and legislative and statewide offices.